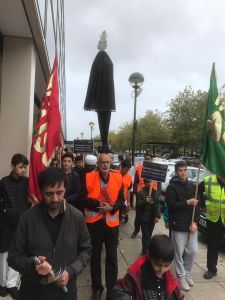 Despite the rain, members of the Zainabiya Islamic Centre, together with representatives from numerous faiths, took to the streets on Sunday 29th September 2019 as part of a peaceful procession to promote ‘Peace and Humanity’.

The 25 th Annual procession commenced at the Church of Christ the Cornerstone passing through the Central Milton Keynes Shopping Centre and concluded at the Amphitheatre in Campbell Park, Milton Keynes. This was followed by an interfaith meeting at the Amphitheatre, where Christians, Muslims, Jews, Buddhists, and Hindus, attended as a sign of solidarity and mutual respect.

Speeches were delivered by Shaykh Jaffer Ladak, The Mayor of Milton Keynes, Lynda Gilbert from the Milton Keynes & District Reform Synagogue and Vani Moodly from the Hindu Community. The atmosphere was truly wonderful, with hope and unity being the overriding theme.

The event was an excellent opportunity to promote ‘Peace and Humanity’ through the personality and message of Imam Husain (A) – numerous flags and placards were displayed during the procession and there were readings by the Tejani brothers to commemorate the events of Karbala.

To further propagate the legacy of Imam Husain (A), BBC 3 Counties Radio also devoted some time to explain the relevance and purpose of the peaceful procession. The event also supported a local charity Emily’s star which supports families who have a child or children with any life-limiting or life-threatening illness within Milton Keynes & Children with Trisomy 18 also known as Edwards Syndrome within the UK.

The chairman of the organization, Dr. Seyed Mohseni, commented:

“Centuries have passed since Imam Hussain (A) sacrificed everything for the rightful cause of saving the teachings of Islam and the flame of that revolution still burns bright. This is evident from the processions that are held all over the world during the months of Aza, especially millions who march to Karbala to commemorate the martyrdom of Imam Hussain (A).”

The Holy Prophet (peace be upon him and his progeny) has said:

“Surely, there exists in the hearts of the believers, with respect to the martyrdom of Hussain, a heat that never subsides.”

This heat of faith and awakening of consciousness has led to innumerable revolutions in human history, both in individual lives and in society as a whole. The message of Imam Hussain still resonates in the hearts of truth seekers. It inspires leaders to fulfill their obligations with respect to opposing evil and protecting goodness. It enjoins all those who heed the call of truth to rise against the unjust powers and confront evil:

“Zainabiya Islamic Centre would like to extend their sincere gratitude to Shaykh Jaffer Ladak, The Mayor of Milton Keynes, The Council of Faiths, Thames Valley Police, Milton Keynes Interfaith, Tejani brothers, volunteers from Hujjat Stanmore, Interfaith volunteers, and all those who participated in the Juloos and contributed to spreading the message of Aba Abdillah (A).